I finished listening to The Remnant by Tim Lahaye and Jerry B Jenkins. It is the tenth book f the Left Behind book series. There are 16 books in the book series.

In this book, the pilot who was captured and tortured got free. Chloe and the others got him to safety. The rivers also turned to blood. The GC found out about the safe house so all the tribulation force moved to different parts of the world. The believers in Jerusalem was moved to Petra. (I saw a show on tv about Petra. It’s an interesting place.) Nicolae orders a bombing on Petra. The bombing happened and the believers were on fire, but not hurt. Cameron’s old boss is assigned to take the Mark. He was badly wounded so there is no way they could give him the Mark. He refused anyway because he became a believer. The man who took him to the place to get the Mark killed himself. Then Nicolae ordered the false prophet to get people to do signs and wonders. Many fall for it and died. (That’s so sad that people fell for it.)  The sun becomes intense and then darkness fell over Nicolae’s palace. They were in pain.

I really liked this book. I’m listening next to Armageddon by Tim Lahaye and Jerry B Jenkins.

You can The Remnant at Wordery.com, Kobo.com, and Downpour.com. 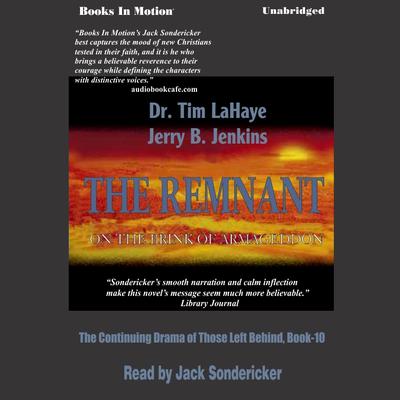