I finished reading Feedback by Robison Wells yesterday. It is the second book of the book Variant. I liked Variant. It ended in a cliffhanger and I was a little mad that Overdrive didn’t have the second book. I had planned on buying the book until a few months ago I looked to see if Overdrive had the second one and they did!!

Variant is about a boy named Benson Fisher. He wanted to try out a private high school that sounded really nice and cool. But he soon found out that the school is not really a high school at all. There were “students,” but no adults. Which means no teachers. The high school was like a prison because you had bracelets that unlocked doors. And the only time you got to go outside was to play paint-ball. Then the real secret came out that some of the “students” were robots. Benson decided to try to escape.

Feedback is about Benson escaping. Benson and a girl named Becky arrive at a town. The town is full of humans from the school. The humans are connected to the robots. They have implants in them. Benson still wants to escape. The school still wants Benson and Becky. Becky gets kidnapped by the leader of the school. Benson goes to save her. In doing that, he learns that the leader has robots everywhere and wants to replace humans with robots. My guess to take over the world. It is hinted that the leader is an alien which escapes. The exposure of the robots would cause worldwide panic.

I liked this book up until the end. I hated that this ended up being an alien book. Now I’m reading Game of Lives by James Dasher (the third book of the Mortality Doctrine book series).

You can find the book at Amazon.com, Wordery.com, Downpour.com, Kobo.com, and Walmart.com. 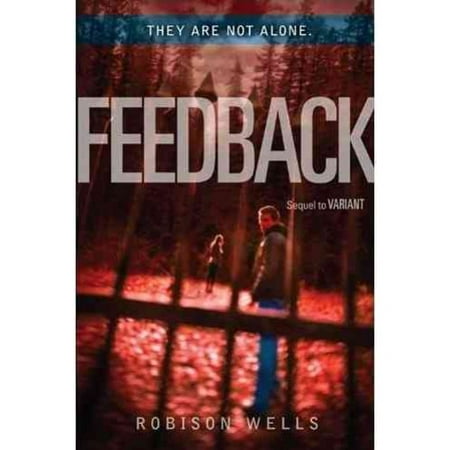